Give a Brief Description of the Process of Synthesis of Food in Green Plants. - Science

Give a brief description of the process of synthesis of food in green plants.

Photosynthesis is defined as the process in which the chlorophyll-containing plant cells synthesise food in the form of carbohydrates, using carbon dioxide and water in the presence of solar energy. 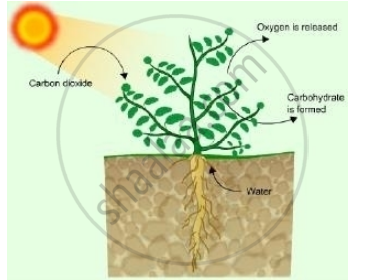 a) Water is taken in from the roots of the plant and is transported to the leaves.

b) Carbon dioxide from the air enters the leaves through the tiny pores called stomata and diffuses to the cells containing chlorophyll.

c) Solar energy is used to break water into hydrogen and oxygen. This hydrogen is combined with carbon dioxide to form food for the plants, which is ultimately used by the animals as well.

Thus, photosynthesis can be represented by the following equation.

The green plants have chlorophyll in the leaves. The leaves use C02 and water to make food in presence of sunlight.

Concept: Photosynthesis — Food Making Process in Plants
Is there an error in this question or solution?
Chapter 1: Nutrition in Plants [Page 9]
Q 4 Q 3Q 5
Advertisement Remove all ads