Explain the Working and Application of a Sonar. - Science 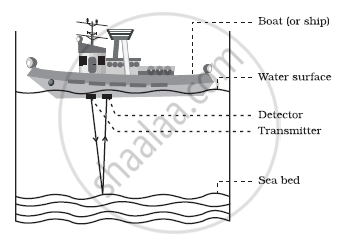 A beam of ultrasonic sound is produced and transmitted by the transducer (it is a device that produces ultrasonic sound) of the SONAR, which travels through sea water. The echo produced by the reflection of this ultrasonic sound is detected and recorded by the detector, which is converted into electrical signals. The distance (d) of the under-water object is calculated from the time (t) taken by the echo to return with speed (v) is given by 2d = v × t. This method of measuring distance is also known as ‘echo-ranging’.

Concept: SONAR
Is there an error in this question or solution?
Chapter 12: Sound [Page 175]
Q 19 Q 18Q 20
Advertisement Remove all ads