Explain, with the Help of a Suitable Example, How We Can Show that Lenz'S Law is a Consequence of the Principle of Conservation of Energy. - Physics

Explain, with the help of a suitable example, how we can show that Lenz's law is a consequence of the principle of conservation of energy.

Lenz's law states that the polarity of induced emf is such that it tends to produce a current which opposes the change in magnetic flux that produced it. The negative sign shown in equation `epsilon = -(d Ø_"g")/(d"t")` represents this effect. 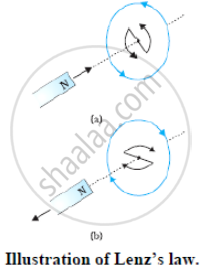 Suppose that the induced current was in the direction opposite to the one depicted in Fig. (a). In that case, the South-pole due to the induced current will face the approaching North-pole of the magnet. The bar magnet will then be attracted to the coil at an ever-increasing acceleration. A gentle push on the magnet will initiate the process and its velocity and kinetic energy will continuously increase without expending any energy. If this can happen, one could construct a perpetual-motion machine by a suitable arrangement. This violates the law of conservation of energy and hence can not happen. Now consider the correct case shown in Fig. (a). In this situation, the bar magnet experiences a repulsive force due to the induced current. Therefore, a person has to do work in moving the magnet. Where does the energy spent by the person go? This energy is dissipated by Joule heating produced by the induced current.