Explain the Three Properties of the Indifference Curves. - Economics

Explain the three properties of the indifference curves.

2. A slope of indifference curves represents a marginal rate of substitution:-

The marginal rate of substitution (MRS) is the rate at which a consumer is willing to substitute one commodity for another commodity.

MRS is the rate at which the output of Good Y is sacrificed for every additional unit of Good X.

3. In an indifference map, higher IC represents a higher level of satisfaction:- 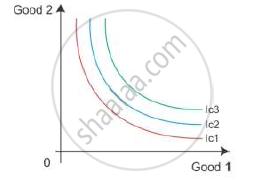 Concept: Indifference Curve
Is there an error in this question or solution?
Advertisement Remove all ads
2015-2016 (March) All India Set 1
Q 13Q 12Q 14