Explain the steps in process of rDNA technology with suitable diagrams. - Biology

Explain the steps in process of rDNA technology with suitable diagrams.

The steps involved in gene cloning are as follows:

i. Isolation of DNA (gene) from the donor organism:

ii. Cutting of the desired gene:

iii. Insertion of a desired foreign gene into a cloning vector (vehicle DNA):

vii. Expression of the gene to obtain the desired product: 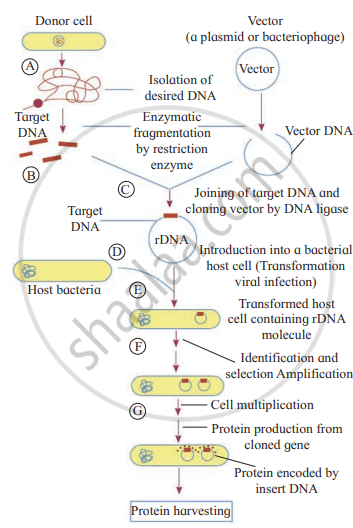 Outline of the process of recombinant DNA technology

Concept: Methodology for rDNA Technology
Is there an error in this question or solution?
Advertisement Remove all ads
Chapter 12: Biotechnology - Exercises [Page 292]
Q 4.2Q 4.1Q 4.3