Explain the pollination process in maize.

Pollination in Maize - Pollination in maize is brought about by the wind. The maize plant is monoecious. The cluster of male flowers called tassel are borne terminally whereas the female inflorescence i.e. cobs are borne laterally at lower levels. Silky thread-like styles project out of the female flowers. Male flowers produce many heavy pollen grains, which get released during mild winds and fall down vertically. They fall on the stigma, bringing about pollination. 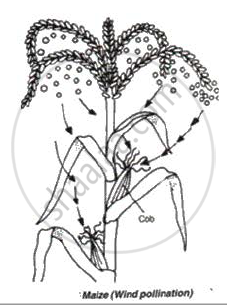 Concept: Fertilization in Plants
Is there an error in this question or solution?
Chapter 8: Pollination and Fertilization - Exercise [Page 72]
Q 5.1 Q 4.2Q 5.2
Advertisement Remove all ads