Explain the mechanism of the formation of a longitudinal wave when the source vibrates in the air. - Physics

Explain the mechanism of the formation of a longitudinal wave when the source vibrates in the air.

PROPAGATION OF SOUND IN AIR: When a source of sound vibrates, it creates a periodic disturbance in the medium near it (i.e., the condition of medium changes). The disturbance then travels in the medium in form of waves. This can be understood by the following example.
Example: Take a vertical metal strip with its lower end fixed. Push its upper end to one side and then release it. As it vibrates, i.e. moves alternately to the right and left, sound is produced. Figure shows the steady (or mean position) of the metal strip and normal condition of air layers near the strip. 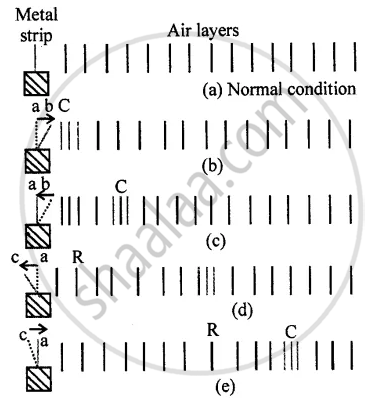 As the strip moves to the right from a to b in Figure it pushes the particles of air layer in front of it. So the particles of air in this layer come closer to each other i. e., air in that layer gets compressed (or compression is formed at C). The particles of this layer while moving towards right, pushes and compresses the layer next to it, which then compresses the next layer and so on. Thus the disturbance moves forward in form of compression. The particles of the medium do not move with the compression.
As the metal strip starts returning from b to a in Figure after pushing the particles near the strip, the compression C moves forward and the particles of air near the strip return back to their normal positions due to the elasticity of the medium.
When the strip moves to the left from a to c in Figure it pulls the layer of air near it towards left and thus produces a space of very low pressure on its right side. The air layers on the right side of the strip expand in this region thus forming the rarefied layers. ‘This region of low pressure is called a rarefaction R.
By the time the strip returns from c to its mean position a in Figure the rarefaction R moves forward and air layers near the strip return back to their normal position due to the elasticity of the medium.
In this manner, as strip moves to the right and left repeatedly, the compression and rarefaction regions are produced one after the other which carry the disturbance along with, definite speed depending on the nature of the medium.
One complete to and fro motion of the strip forms one compression and one rarefaction which together constitute one wave. This wave in which the particles of the medium vibrate about their mean positions, in the direction of propagation of sound, is called the longitudinal wave. Thus sound travels in air form of longitudinal waves. Actually, the longitudinal waves can be produced in solids, in liquids as well as in gases.
Thus, due to propagation of the wave in a medium, the particles of the medium vibrate about their mean positions (without leaving their positions) and they transfer the energy with a constant speed from one place of medium to the other place

Concept: Properties of Sounds
Is there an error in this question or solution?
Chapter 7: Sound - Short/Long Answer questions [Page 136]
Q 3Q 2Q 4