Explain the charging by induction in terms of movement of electrons. - Physics

Explain the charging by induction in terms of movement of electrons. 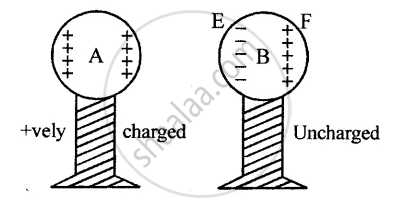 Electrons which are equal in number of protons in uncharged B are attracted towards positively charged A. Hence end E is charged negatively called BOUND CHARGE and protons remain at end F of B is positively charged called FREE charge:
This induced charge remains on B so long as body A remains near B.

Concept: Concept of Static Electricity
Is there an error in this question or solution?
Chapter 8: Electricity - Exercise 8 (B) (Short/Long answer questions) [Page 167]
Q 30 Q 29Q 31
Advertisement Remove all ads