Structure of the carbonyl functional group:

2) The remaining unhybridized 2p orbital of carbon overlaps with 2p orbital of oxygen to form pi (π) bond. This results in double bond between carbon and oxygen.

3) The bond angles are approximately 120° as expected of a trigonal coplanar
structure as shown in the figure. 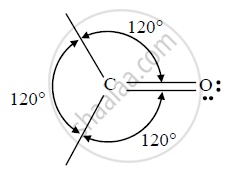 The oxygen atom carries two lone pairs of electrons. The π-electron cloud lies above and below the plane of the rest of the atoms.

Concept: Aldehydes and Ketones - Nature of Carbonyl Group
Is there an error in this question or solution?
2012-2013 (October)
Q 8.2 Q 8.1Next
Advertisement Remove all ads