RING Topology:
(1) RING topologies are wired in a circle. Each node is connected to its neighbours on either side, and the data transmit along the ring in one direction only.
(2) Each device incorporates a receiver and a transmitter and serves as a repeater that passes the signal to the next device in the ring.
(3) The RING topology is as shown in the following figure: 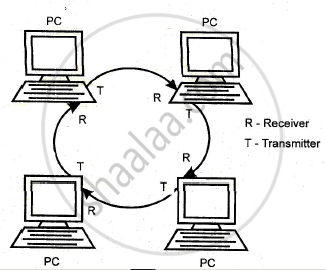