Semiconservative method of replication:
After replication, each daughter DNA molecule has one old and other new strand.
As parental DNA is partly conserved in each daughter DNA, the process of replication is called semiconservative.
The model of semiconservative replication was proposed by Watson and Crick.
Mechanism of DNA replication:
i. Activation of nucleotides:
All the four types of DNA nucleotides are found in the nucleoplasm in the form of their monophosphates namely dAMP, dGMP, dTMP and dCMP.
They are activated using ATP to form triphosphates, namely dATP, dGTP, dTTP and dCTP respectively.
It occurs in presence of enzyme phosphorylase and the process is called activation of nucleotides. [dAMP + ATP  dATP + AMP]
ii. Origin (Initiation):
The replication starts at a specific point on DNA molecule called origin or initiation point.
In prokaryotes, DNA has single origin point, while in eukaryotes, there are several origin
points.
iii. Incision:
At the origin, DNA molecule breaks because of formation of an incision (nick).
This incision is made by the activity of endonuclease enzyme, hence hydrogen bonds get broken.
iv. Unwinding of DNA molecule:
The two strands start unwinding.
This takes place with the help of DNA unwinding protein, i.e. helicase enzyme.
By the action of topoisomerase, two strands get separated from each other.
Now, the DNA molecule appears as inverted ‘Y’ shaped structure called replication fork.
The portion or unit of DNA undergoing replication is called replicon.
The two separated strands of the DNA are stabilized by Single Strand Binding Protein (SSBP) or helix destabilizing protein.
v. Synthesis of new strand:
For synthesis of a complementary new strand, each separated strand acts as a template (site) or mould.
It is initiated by a small RNA molecule called RNA primer.
Synthesis of this RNA primer is controlled by enzyme RNA primase.
The RNA primer attaches itself at the 3 end of the template strand and attracts the new nucleotides from nucleoplasm.
Appropriate nucleotides are selected and are attached by H-bond to their respective complementary bases on the old strand.
Synthesis of new strand occurs in the presence of enzyme DNA Polymerase.
The successive nucleotides are joined to each other with the help of phosphodiester linkages forming a new strand.
vi. Leading and Lagging strand:
During DNA replication, the strand which opens from 3-5 is called leading template and its complementary strand is called leading strand or continuous strand. It is constructed continuously at a faster rate.
The other strand which opens from 5-3 is called lagging template and its complementary strand is called lagging strand. It is constructed discontinuously at a slower rate.
The lagging strand is constructed in the form of short segments called Okazaki fragments which are later joined by the enzyme DNA ligase.

The replication of DNA strands always takes place in 3' to 5' direction of template strand, while construction of new strand occurs in 5 to 3 direction, as DNA polymerase shows 5' to 3'direction activity.
vii. Formation of new DNA chains:
In this way for each old strand, a new complementary strand is constructed.
Now, one old strand and the other new strand undergo coiling to form two identical daughter DNA molecules at the end of the process. 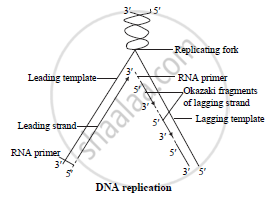 Concept: DNA Replication - The Experimental Proof
Is there an error in this question or solution?
Advertisement Remove all ads
Share
0
0
0
0
0
Notifications