Explain the Relationship Between the Marginal Products and the Total Product of an Input. - Economics

Explain the relationship between the marginal products and the total product of an input. 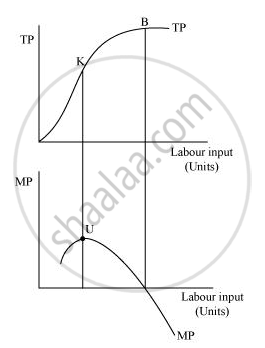 1) TP increases at an increasing rate till point K, when more and more units of labour are employed. The point K is known as the point of inflexion. At this point MP (second part of the figure) attains its maximum value at point U.

2) After point K, TP increases but at a decreasing rate. Simultaneously, MP starts falling after reaching its maximum level at point U.

3) When TP curve reaches its maximum and becomes constant at point B, MP becomes zero.

4) When TP starts falling after B, MP becomes negative.

5) MP is derived from TP by

Concept: Marginal Product
Is there an error in this question or solution?
Chapter 3: Production And Costs - Exercise [Page 50]
Q 5 Q 4Q 6
Advertisement Remove all ads