Explain the process of formation of urine with suitable diagram - Biology

Explain the process of formation of urine with suitable diagram

This complex process is completed in 3 steps namely.
a. Ultrafiltration
b. Selective Reabsorption
c. Tubular Secretion
a. Ultrafiltration:
Filtration of blood under pressure is called Ultrafiltration.
It takes place in Malpighian bodies.
It is physical process and occurs through the glomerulus under  high osmotic pressure.
Ultra pressure is developed in glomerulus due to difference in diameters of afferent and efferent renal arterioles.
Blood enters the glomerulus at a fast rate through afferent arteriole with greater diameter and drains away by efferent arteriole with smaller diameter at slower rate. This creates hydrostatic pressure within glomerulus. This is called effective filtration pressure (EFP).
The filtration takes place through semipermeable membrane or filtration membrane under pressure.
The ultrafiltrate enters the urinary space of Bowman’s capsule. This filtrate is blood plasma without proteins (deproteinized plasma). About 125 ml of ultrafiltrate is produced per minute.

b. Selective reabsorption:
In this process 99% of the filtrate is reabsorbed.
There are two processes involved in this step: Passive transport or osmosis and active transport.
Active transport is transport against the concentration gradient by using ATP molecules.
When the filtrate passes through the renal tubule there is exchange of substances between the blood in peritubular capillary network.
High threshold substances e.g. glucose, amino acids, potassium and calcium ions etc. are completely reabsorbed.

Urea and uric acid are low threshold substances. They are reabsorbed negligibly. Water is reabsorbed everywhere except in the ascending loop of Henle. This absorption occurs by osmosis and is known as obligatory a bsorption of water. Amino acids and ions are pumped out from PCT. Glucose is maximally reabsorbed in healthy persons so that no glucose molecules remain in the urine.
Urea is reabsorbed because urea molecule is very small and tubules are partially permeable to it. 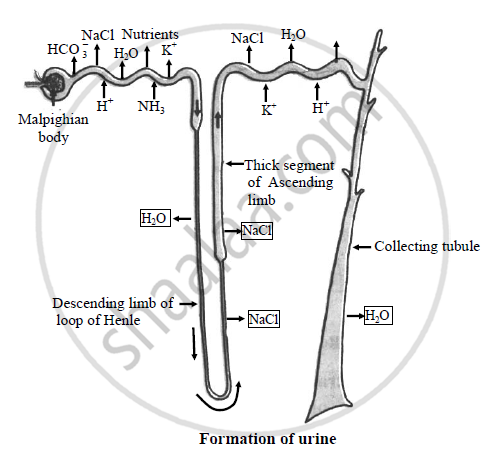 c. Tubular Secretion (Renal Secretion):
It is also called active secretion or renal secretion.
The separation and secretion of unwanted substances from peritubular capillary network into tubular fluid is called tubular secretion. During ultrafiltration some of the unwanted substances escape into the efferent arteriole.
These substances are actively separated and secreted inside renal tubule such as K+ ion, H+ ion, creatinine, uric acid, penicillin, urea, ammonia etc. This process is important for homeostasis.
Finally fluid become hypertonic which is excreted as urine.
Absorption of water is controlled by ADH and absorption of salt is controlled by aldosterone.