Explain the principle, construction and working of Light Emitting Diode.

Principle: The recombination process:
• In a forward biased p-n junction through electrons and holes diffuse through the
junction in opposite directions. In this process they recombine with each other in the depletion region and release some energy called the recombination energy.
• According to energy band structure, during the recombination process the electron come back to the valence band and fulfil the gap called a hole. This is accompanied by the release of some energy equal to the band gap energy Eg.

• For ordinary semiconductors like Ge and Si the bandgap energies are 1. 12 eV and 0. 63 eV respectively. In these solids the recombination energy is heat energy.

• However, if Eg ranges from 1.7eVto 3.0 eV, according toE= hv =hc/λ, the emission
takes place within the visible region. This is possible if the direct band A GP ionic
crystals like Gallium Arsenide (GaAs}, Gallium Arsenide Phosphide (GaAsP} and
Gallium Phosphide (GaP} are used as the diode material. In this case the
recombination energy is emitted as optical energy.
• The wavelength of the emitted light is given by
A =hc/Eg = 1.24/ Eg(eV} μm
• The colours of the emitted light are as follows:
(1) GaAs, GaP, GaAsP for red, orange, yellow and green light.
(2} ZnS and SiC for blue,
(3} GaN for violet.
Construction and working:

• A light emittingdiode is always forward biased and the forward voltage across a LED is Typical forward LED voltage ranges from 1.2 V to 3.2 V depending on the device.
• The symbol of LED and a typical LED circuit are shown in Fig.(a)and (b)respectively. The energy band diagram showing the recombination process is
shown in Fig. (c). The intensity of the light output of an LED is directly proportional to the forward current which is shown in Fig.(d}.
• The materials used for LED operate at low voltages and current typically at 1. 5 V and 10 rnA. Hence, LEDs are low price device which cannot be used for illumination 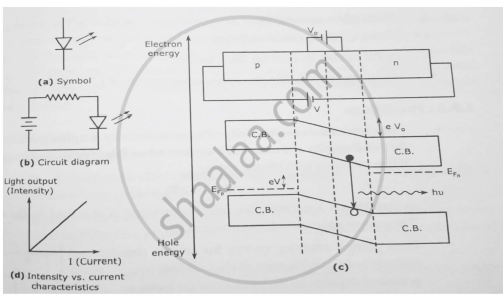 purposes.
• The LEOs have very low reverse break down voltage, typically, 3V Therefore, LEOs should never be reverse biased which will cause damage to it.

Concept: Applications of Uncertainty Principle
Is there an error in this question or solution?
2018-2019 (December) CBCGS
Q 6.c Q 6.bNext
Advertisement Remove all ads