Explain Newton’s ring experiment and show that diameters of nth dark rings are proportional to square root of natural numbers. 2.The thickness of the film gradually increases from the point of contact outwards.

3.If monochromatic light is allowed to fall normally on this film,a system of alternate bright and dark concentric rings,with centre dark is formed in the air film.

4.These rings were first studied by Newton and hence they are known as Newton’s rings.

5.They can be seen through a low power microscope focused on the film.

6.Newton’s rings are formed as a result of interference between the waves reflected from the top and bottom surfaces of the air film formed between the lens and the plate. 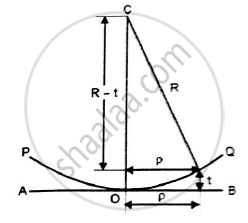 Let ρ be the radius of a Newton’s ring corresponding to the constant film thickness t.

If D is the diameter of Newton’s ring