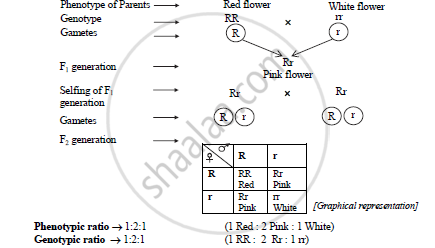 This indicates the following facts:
a. Pink is the phenotype of the heterozygous genotype (Rr).
b. This pattern of inheritance is due to non-blending of the characters,  because one-fourth of the F2 progeny are red-flowered and another one-fourth are white-flowered, which are the parental combinations.
c. The phenotypic and genotypic ratios are the same.
d. This type of observation has resulted from incomplete dominance of the alleles

Concept: Deviations from Mendelism - Incomplete Dominance, Co-dominance, Multiple Alleles and Inheritance of Blood Groups, Pleiotropy
Is there an error in this question or solution?
Advertisement Remove all ads
Share
0
0
0
0
0
Notifications