Explain How the Formation of a Rainbow Occurs. - Science and Technology 1

Explain how the formation of a rainbow occurs.

(i) The formation of a rainbow in the sky is a combined result of refraction, dispersion and reflection of sunlight by water droplets present in the atmosphere after it has rained. 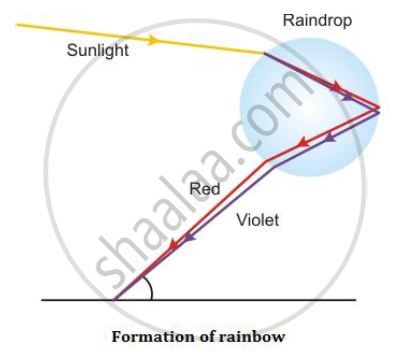 (ii) Sunlight is a mixture of seven colours: Violet, indigo, blue, green, yellow, orange and red. After it has stopped raining, the atmosphere contains a large number of water droplets. When sunlight is incident on a water droplet, there is

(iii) The refractive index of water is different for different colours, being maximum for violet and minimum for red. Hence, there is dispersion of light (separation into different colours) as it passes from air to water.

(iv) The combined action of different water droplets (acting like tiny prisms) produces a rainbow with red colour on the outer side and violet colour on the inner side. The remaining five colours lie between these two colours. The rainbow is seen when the Sun is behind the observer and the water droplets are in the front.