Explain with the Help of a Diagram, How Depletion Region and Potential Barrier Are Formed in a Junction Diode. - Physics

Explain with the help of a diagram, how depletion region and potential barrier are formed in a junction diode.

State briefly the processes involved in the formation of p-n junction explaining clearly how the depletion region is formed. 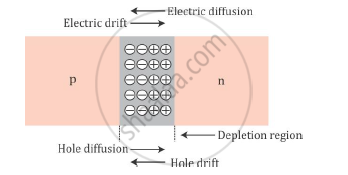 During the formation of a p–n junction and because of the concentration gradient across the p and n sides, holes diffuse from the p-side to the n-side (p → n) and electrons diffuse from the n-side to the p-side (n → p). This motion of charge gives rise to a diffusion current across the junction. When an electron diffuses from n → p, it leaves behind an ionised donor on the n-side. This ionised donor (positive charge) is immobile as it is bonded to the surrounding atoms. As the electrons continue to diffuse from n → p, a layer of positive charge (or positive space–charge region) on nside of the junction is developed. Similarly, when a hole diffuses from p → n due to the concentration gradient, it leaves behind an ionised acceptor (negative charge) which is immobile. As the holes continue to diffuse, a layer of negative charge (or negative space–charge region) on the p-side of the junction is developed. This space–charge region on either side of the junction together is known as the
depletion region. 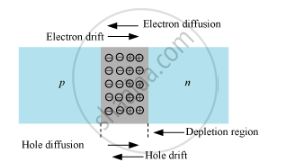 Hence, a space-charge region is formed on either side of the junction, which has immobile ions and is devoid of any charge carrier, called as depletion layer or depletion region