The p-n junction is formed at the initial stage , the fermi level on the p and n sides are at different energy states. This is because of the fact that p side has excess holes and n side has excess electrons as free carriers. 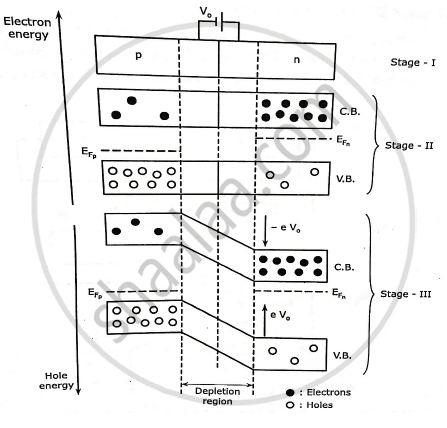 The diffusion through the junction start to equalize the number of charge carrier on both sides. As the conduction band of the n side has high density of carrier, electrons of the conduction band diffuse through the junction from the n side to the p side. Similarly holes of the valence band diffuse through the junction from p side to n side.
As more electrons occupy band of p side the fermi level EFP starts moving upwards along with the entire p-type energy band structure. Similarly more holes entering the valence band of n-side make the fermi level EFn  moves downwards. The energy band structure also move downwards with EFn  . Finally a stage comes when the charge density on both sides of the same band is uniform. In this equilibrium condition the fermi levels EFn
and EFp  align with each other.
The conduction band and the valence band of both sides are positioned in such a manner that a conduction hill of height -eVO  and valence hill of height eVO  are formed. These are the potential energies of the electrons and holes respectively due to the potential barrier VO