Explain different types of non-genetic RNA with diagrams and functions.

1. Genetic RNA: It acts as genetic material in some viruses.

2. It is produced on the DNA strand inside nucleus by a process called transcription and then transferred to the cytoplasm.
3. It constitutes about 3-5% of the total RNA content of the cell.
4. It is long RNA and the molecular weight of an average sized m-RNA is about 5,00,000.
5. It is always single stranded, linear and straight (unfolded).
6. It has two ends  5 end and 3 end.
7. A triplet of nucleotides on m-RNA is called codon.
8. Each codon on m-RNA specifies one amino acid. This is called m-RNA language or genetic code or cryptogram.
9. The codon present at 5 end of mRNA is called initiation codon or start codon. The common initiation codon is AUG or in some cases GUG. AUG and GUG specify amino acids methionine and valine respectively.
10. The codon present at 3 end is called termination codon or stop codon or nonsense
codon (as they do not specify any amino acid). The termination codon may be UAA (Ochre) or UAG (Amber) or UGA (Opal).
11. m-RNA is short lived and is degraded soon after protein synthesis.

Functions of m-RNA:
1. It carries genetic information from DNA to ribosomes during protein synthesis.
2. The genetic code of m-RNA gets translated into the sequences of amino acids to
form proteins.

b. Ribosomal RNA (r-RNA):
1. It is present in ribosomes, hence the name ribosomal RNA.
2. It consists of a single strand. The single strand is folded upon itself in certain regions.
3. In folded regions, complementary base pairing occurs, while in unfolded regions, it is absent. Hence, r-RNA does not show purine-pyrimidine equality.
4. It constitutes about 80% of the total RNA content of the cell.
5. The molecular weight ranges from 40,000 to 100,000.
Functions of r-RNA:
1. It provides proper binding site for m-RNA on the ribosome.
2. It orients m-RNA molecule in such a way that all the codons are properly read.
3. It releases t-RNA molecule after transfer of activated amino acid to polypeptide chain.
4. It also protects the protein molecule under construction.
5. It also protects m-RNA from Rnase enzyme.

c. Transfer RNA (t-RNA) or Soluble RNA (s-RNA) or Supernatant RNA or adapter
RNA.
1. It is the smallest of the three types of non-genetic RNA.
2. It transfers activated amino acids to the site of protein synthesis. Hence, it is called transfer RNA.
3. It is also called soluble RNA as these molecules cannot be separated from cytoplasm even by ultra centrifugation technique.
4. The t-RNA molecule consists of a single strand folded upon itself.
5. It constitutes about 10-20% of the total RNA content of the cell.
6. It is made up of 73-93 nucleotides with molecular weight of about 23,000-30,000.
7. There are more than 20 different types of t-RNA.
8. Structure of t-RNA can be explained by two models as:

1. Hairpin model:
The t-RNA molecule is folded in such a manner that there is formation of one loop
having a triplet of unpaired bases called anticodon.
The 5 end has G-nucleotide, while at 3 end, there is a sequence of CCA nucleotides.
2. Clover leaf model (trifoliate leaf model):
i. The clover leaf model of t-RNA shows presence of three arms, namely – DHU
arm, middle arm and T ψ C arm.
ii. These arms have loops at their ends such as amino acyl binding loop, anticodon
loop and ribosomal binding loop respectively.
iii. The anticodon loop has anticodon which is a triplet of unpaired nucleotides.
iv. The anticodons present on t-RNA are complementary to codons present on the
m-RNA (anticodons are also referred to as nodoc).
v. In addition, it also shows a small lump called variable arm or variable lump.
vi. Like the hair-pin model of t-RNA, it has G nucleotide at 5 end and CCA
nucleotides at 3 end.

Functions of t-RNA:
It carries specific type of amino acid at CCA end to the ribosomes during protein synthesis.
It places the required amino acid properly in the sequence. (This becomes possible because of
complementary nature of codons and anticodons). 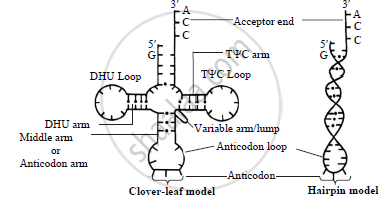