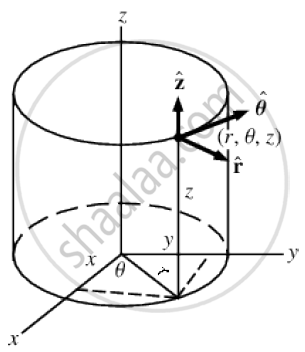 2.The latter distance is given as a positive or negative number depending on which side of the reference plane faces the point.

3.The different co-ordinates of cylindrical co-ordinates is shown in the figure above.The angle θ is the angle made by r with X axis.

4.The origin of the system is the point where all three coordinates can be given as zero.

5.This is the intersection between the reference plane and the axis.

7.The third co-ordinate is called the height or altitude if the reference plane is considered horizontal.

8.Cylindrical coordinates are useful in connection with objects and phenomena that have some rotational symmetry about the longitudinal axis, such as water flow in a straight pipe with round cross-section.

The transformation relation between cartesian and cylindrical co-ordinates are :

Concept: Cylindrical and Spherical Coordinate System
Is there an error in this question or solution?
Advertisement Remove all ads
2016-2017 (June) CBCGS
Q 4.AQ 3.BQ 4.B