Explain the Carbon Cycle with the Help of a Simplified Model. - Biology

Explain the simplified model of carbon cycle in nature.

(iii) The carbon dioxide returns to the atmosphere during respiration, decay and
combustion of plants and animals.

(iv) The organic compounds of plants and animals are buried in the deep soil where they are acted upon by decomposers to change them to petroleum, coal, oil and carbonate rocks. These substances on their combustion release carbon dioxide in the atmosphere.

(v) Some carbon dioxide is found in the dissolved state in water. This gets converted to calcium carbonate in limestone. The weathering and combustion of carbonate-containing rocks or treatment of their minerals give CO2.

(vi) The hot springs and volcanic eruptions also give out CO2 in the atmosphere. 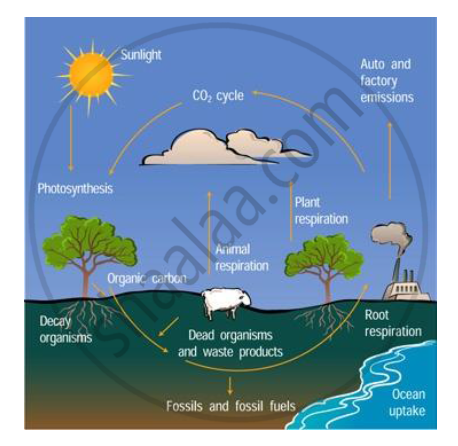 Key process involved in carbon cycle is photosynthesis and respiration. 2. In oceans, carbon-dioxide dissolves readily in water. In rock it gets stored as calcium carbonate.

3. Carbon can either be liberated to atmosphere through respiration or can be passed to animal when being eaten or remain in plant even after death.

5. Excess of carbon-dioxide can cause global warming.