Draw Neat Diagram, Label Them and Explain. the Interior of the Earth - Geography

The interior of the earth 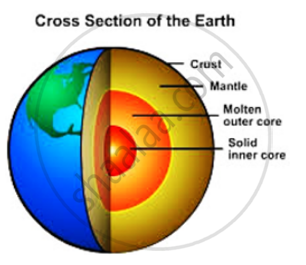 The mantle is the layer beneath the earth’s crust. It is the biggest part of the Earth comprising more than 85% of the Earth's mass. The upper mantle is in a liquid state. It is extremely hot, creating convection currents which are responsible for the movement of plates.