Draw a labelled diagram of Van de Graaff generator. State its working principle to show how by introducing a small charged sphere into a larger sphere, a large amount of charge can be transferred to the outer sphere. State the use of this machine and also point out its limitations.

Van de Graaff generator is a device used for building up high potential differences of the order of a few million volts.

Principle − It is based on the principle that charge given a hollow conductor is transferred to the outer surface and is distributed uniformly over it. 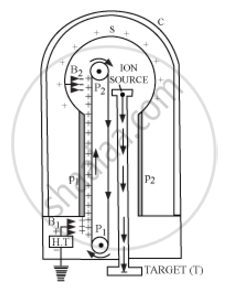 It consists of a large spherical conducting shell (S) supported over the insulating pillars. A long narrow belt of insulating material is wound around two pulleys P1 and P2. B1 and B2 are two sharply pointed metal combs. B1 is called the spray comb and B2 is called the collecting comb.

Limitations: 1) It's a series combination that allows only one route for the movement of charge.