Draw a Labelled Diagram of a Moving Coil Galvanometer. Describe Briefly Its Principle and Working. - Physics

Draw a labelled diagram of a moving coil galvanometer. Describe briefly its principle and working.

Its working is based on the fact that when a current carrying coil is placed in a magnetic field, it experiences a torque. 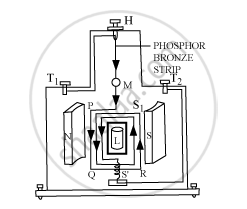 Suppose the coil PQRS is suspended freely in the magnetic field.

Let l = length PQ or RS of the coil

b = breadth QR or SP of the coil

n = number of turns in the coil

I = current passing through the coil in the direction PQRS

At any instant, let α be the angle that the normal drawn on the plane of the coil makes with the direction of magnetic field.

The rectangular coil carrying current, when placed in the magnetic field, experiences a torque whose magnitude is given by:

In equilibrium position of the coil, we have:

It is known as galvanometer constant.