Draw a labeled ray diagram to obtain the real image formed by an astronomical telescope in normal adjustment position. Define its magnifying power.

In normal adjustment, the final image is formed at infinity. 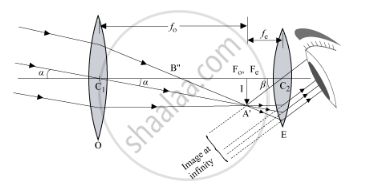 β and α are very small.

I is the image formed by the objective. f0 and fe are the focal lengths of the objective and eyepiece, respectively.

(Distance of the image from the eyepiece is taken as negative.)