Draw Diagrams Showing the Formation of a Double Bond and a Triple Bond Between Carbon Atoms in C2h4 and C2h2 Molecules. - Chemistry

Draw diagrams showing the formation of a double bond and a triple bond between carbon atoms in C2H4 and C2H2 molecules.

The electronic configuration of C-atom in the excited state is:

In the formation of an ethane molecule (C2H4), one sp2 hybrid orbital of carbon overlaps a sp2 hybridized orbital of another carbon atom, thereby forming a C-C sigma bond.

The remaining two sp2 orbitals of each carbon atom form a sp2-s sigma bond with two hydrogen atoms. The unhybridized orbital of one carbon atom undergoes sidewise overlap with the orbital of a similar kind present on another carbon atom to form a weak π-bond. 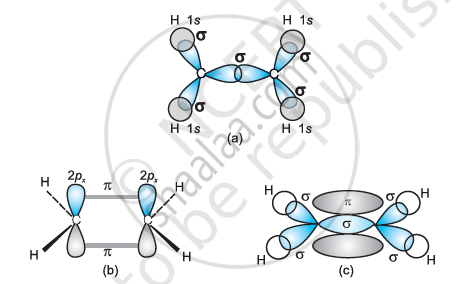 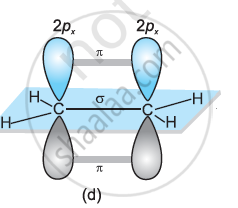 In the formation of C2H2 molecule, each C–atom is sp hybridized with two 2p-orbitals in an unhybridized state.

The two unhybridized 2p-orbitals of the first carbon undergo sidewise overlap with the 2p orbital of another carbon atom, thereby forming two pi (π) bonds between carbon atoms. Hence, the triple bond between two carbon atoms is made up of one sigma and two π-bonds. 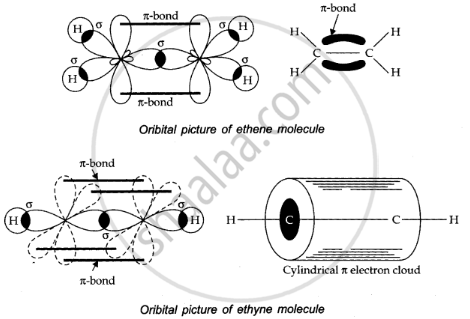 Concept: Hybridisation - Types of Hybridisation
Is there an error in this question or solution?
Chapter 4: Chemical Bonding and Molecular Structure [Page 131]
Q 27 Q 26Q 28
Advertisement Remove all ads