Draw an Acute Angled Pqr. Draw All of Its Altitudes. Name the Point of Concurrence as ‘O’. - Mathematics

Draw an acute angled Δ PQR. Draw all of its altitudes. Name the point of concurrence as ‘O’. 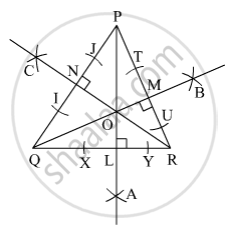 Steps of construction :
(i) Draw any acute angled ∆PQR.
(ii) With P as centre, draw an arc that cut the side QR at X and Y.
(iii) With X as centre and radius more than half of XY, draw an arc below QR. With Y as centre and same radius draw another arc that cut the previous arc at A.
(iv) Join PA that intersect QR at L. So, PL is the altitude on side QR.
In the same manner, draw QM⊥PR and RN⊥PQ.
Hence, ∆PQR is the required triangle with altitudes PL, QM and RN on sides QR, RP and PQ respectively with O as the point of concurrence of all the three altitudes.

Concept: Altitudes of a Triangle
Is there an error in this question or solution?
Advertisement Remove all ads
Chapter 4: Altitudes and Medians of a triangle - Practice Set 4.1 [Page 22]
Q 2Q 1Q 3