Do You Agree with the Following Statement? Give Reason State and Explain the Law of Demand. - Economics

Do you agree with the following statement? Give reason

State and explain the law of demand.

The law of demand focuses on the basic relationship between the price of the good and quantity demanded of the good.

According to this law, other things being constant (ceteris paribus), a consumer’s demand shares an inverse relationship with the price of a good and vice versa. In other words, if the income, price of related goods and taste and preferences of the consumer remain unchanged, then the demand for the good moves in the opposite direction of its price.

The law of demand is based on the following assumptions:

The law of demand can be explained with the help of the following demand schedule:

The schedule shows that as the price of commodity X increases from Rs 10 to Rs 15, the quantity demanded for X falls from 75 units to 50 units. Thus, there is a negative relationship between demand and price. 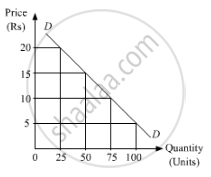 Concept: Demand Curve and Its Slope
Is there an error in this question or solution?
Chapter 3: Demand Analysis - Exercise [Page 24]
Q 1 Q 2Q 2
Advertisement Remove all ads