(2) Two different arrangements of these groups around the carbon atom are possible as shown in the figure. Hence, it exist as a pair of enantiomers. The two enantiomers are mirror images of each other and are non-superimposable. 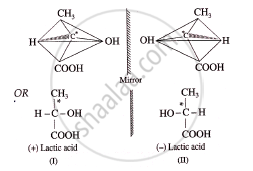 (3) Hence, lactic acid can exist in two different forms, d-Form and l-form, which are non-superimposable mirror images of each other. d-form rotates the plane of plane-polarized light to the right, while l-form rotates the same to the left.

(4) A mixture containing equimolar amounts of the d- and l-forms is a racemic mixture which is optically inactive (dl - form). This inactivity arises due to external compensation.