Discuss formation of copper pairs and energy gap in superconductor on the basis of BCS theory. - Applied Physics 1

Discuss formation of copper pairs and energy gap in superconductor on the basis of BCS theory.

The quantum theory of superconductivity developed by bardeen, cooper and schrieffer is known as BCS theory.

• During conduction the electron motion is interrupted by these phonon waves and resistivity aries in normal conductors.

• In superconductors during the interaction of electrons with phonons some electron
absorbs phonons and their energy increases by an amount hϑ. When they release this
energy as phonons other electron absorbs them. In this way electron in superconductors
interact with each other through the emission and absorption of phonons.

• If a phonon emitted by one electron is absorbed by another electron, the electron form a pair called Cooper pair. This phonon mediated electron interaction is attractive.

• There exist an energy gap between the superconducting state and the normal state. this is different from the energy gap in band theory of solids. This energy gap represents the
binding energy of a cooper pair. This is of the order of 10-3eV at low temperature .
• In the cooper pairs of electrons the spin and the momenta are correlated. Cooper pairs
have a spin zero.

• The stability of copper pairs results in superconductivity. 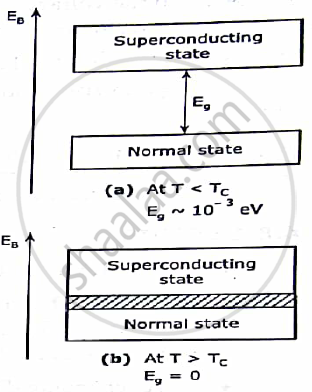 Concept: BCS Theory (concept of Cooper pair)
Is there an error in this question or solution?
2016-2017 (December) CBCGS
Q 4.a Q 3.bQ 4.b
Advertisement Remove all ads