Discuss the chemistry of Lassaigne’s test.

he cyanide, sulphide, and halide of sodium formed are extracted from the fused mass by boiling it in distilled water. The extract so obtained is called Lassaigne’s extract. This Lassaigne’s extract is then tested for the presence of nitrogen, sulphur, halogens, and phosphorous.

(a) Test for nitrogen

In the Lassaigne’s test for nitrogen in an organic compound, the sodium fusion extract is boiled with iron (II) sulphate and then acidified with sulphuric acid. In the process, sodium cyanide first reacts with iron (II) sulphate and forms sodium hexacyanoferrate (II). Then, on heating with sulphuric acid, some iron (II) gets oxidised to form iron (III) hexacyanoferrate (II), which is Prussian blue in colour. The chemical equations involved in the reaction can be represented as

(b) Test for sulphur

In the Lassaigne’s test for sulphur in an organic compound, the sodium fusion extract is acidified with acetic acid and then lead acetate is added to it. The precipitation of lead sulphide, which is black in colour, indicates the presence of sulphur in the compound.

The sodium fusion extract is treated with sodium nitroprusside. Appearance of violet colour also indicates the presence of sulphur in the compound

If in an organic compound, both nitrogen and sulphur are present, then instead of NaCN, formation of NaSCN takes place.

This NaSCN (sodium thiocyanate) gives a blood red colour. Prussian colour is not formed due to the absence of free cyanide ions 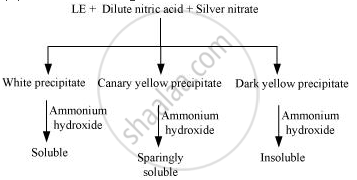 In the Lassaigne’s test for halogens in an organic compound, the sodium fusion extract is acidified with nitric acid and then treated with silver nitrate.

Lassaigne’s test: Nitrogen, sulphur, halogens and phosphorous present in an organic compound are detected by Lassaigne’s test.
First of all compounds are converted to ionic form by fusing the compound with sodium metal.

Cyanide, sulphide or halide of sodium are extracted from the fused mass by boiling it with distilled water. This extract is known as sodium fusion extract.