Dialogue Writing Look at the Following News Headline and Develop a Dialogue Between You and Your Friend. Use the Points Given in the Call-outs. Master-blaster'S Last Innings. - English

Look at the following News Headline and develop a dialogue between you and your Friend. Use the points given in the call-outs. MASTER-blaster's last innings. 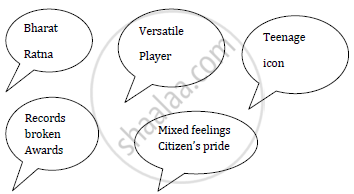 B1.
Street child gets a new lease of life: Thanks to Human Rights Activists

Mumbai: Seven year old Tanay’s joy knew no bounds when the city’s Human Rights activists gave him his new school uniform, school bag, and books. Tanay was brought to the city from Satara by his aunt and uncle (Smita and Sanjay Pathak) under the pretext of getting him admitted to a good school. However, the family, living in Caroline Apartments, Mahim, soon turned him into a domestic help and deprived him even of basic care.

A month ago a concerned neighbour (identity withheld on request) - contacted the Human Rights Commission office in the city after he heard screams and cries from the apartment where the Pathaks live. “Initially the cries were occasional; however, recently, I had been hearing cries everyday from the house as if someone was being beaten up and pleading for mercy. I was so worried that I had to take some step,” said the neighbour.

The activists learnt that Tanay was a distant nephew of the Pathaks and was being tortured by them when he refused to slog for them. After the Pathaks were arrested by the police, the boy was admitted to a school run by a local NGO and was reunited with his parents. The human rights group has also offered the parents of the boy jobs in the city so that they do not have to live away from their son anymore. A leading hospital has offered to provide free medical aid to Tanay and his family for a year as a part of their CSR initiative. The activists stressed on the fact that children should not be discriminated on any basis and that every child has an equal right to receive education and lead a good life.

B2.
Me: Did you read the newspaper? It says: Master blaster’s last innings!

Friend: Yes, I did. Cricket is never going to be the same again. I just can’t believe that Sachin Tendulkar has retired from all forms of cricket.

Me: I agree with you. Do you know he is also the recipient of the Bharat Ratna, India’s highest civilian award?

Friend: Yes, Sachin is the youngest recipient to date and the first ever sportsperson to receive the award.

Me: Sachin made his Test debut against Pakistan in Karachi in November 1989 when he was just 16. Where do you think we would be in a year?

Friend: I really don’t know! His versatility and perseverance not only enhanced his reputation as a
fine batsman, but also made him a teenage icon. In fact, my older cousins still admire him and talk
about his performances as a batsman, bowler, fielder and a captain.

Me: When the legend walked down the ground for his last innings at Wankhede Stadium, the
crowd rumbled with the chants of “Sachin! Sachin”.

Friend: There were mixed feelings pouring out from all corners of the stadium. Some people were
happy to see their star cricketer come out to bat, while some were pondering over the fact that it
was the last match in the illustrious career of Sachin Tendulkar.

Me: He has broken many records and won many awards and honours. It is sad indeed that fans
have to see the game without him playing anymore.

Friend: Let us hope that India gets another player who is as committed and skilled as Sachin
Tendulkar.