Describe Young's double-slit interference experiment and derive conditions for occurence of dark and bright fringes on the screen. Define fringe width and derive a formula for it. - Physics

Describe Young's double-slit interference experiment and derive conditions for occurrence of dark and bright fringes on the screen. Define fringe width and derive a formula for it.

Conditions for occurrence of dark and bright lunges on the screen:

Consider Young's double-slit experimental set up. Two narrow coherent light sources are obtained by wavefront splitting as monochromatic light of wavelength λ emerges out of two narrow and closely spaced, parallel slits S1 and S2 of equal widths. The separation S1 S2 = d is very small. The interference pattern is observed on a screen placed parallel to the plane of S1S2 and at considerable distance.D (D » d) from the slits. OO' is the perpendicular bisector of a segment S1S2, 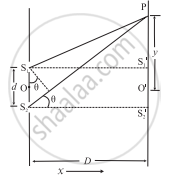 Geometry of the double-slit experiment

Consider, a point P on the screen at a distance y from O' (y « 0). The two light waves from S1 and S2 reach P along paths S1P and S2P, respectively. If the path difference (Δl) between S1P and S2P is an integral multiple of λ, the two waves arriving there will interfere constructively producing a bright fringe at P. On the contrary, if the path difference between S1P and S2P is a half-integral multiple of λ, there will be destructive interference and a dark fringe will be produced at P.

Thus, for bright fringes (or bands),

and for dark fringes (or bands),

These conditions show that the bright and dark fringes (or bands) occur alternately and are equally spaced. For Point O', the path difference (S2O' - S1O') = 0. Hence, point O' will be bright. It corresponds to the centre of the central bright fringe (or band). On both sides of O', the interference pattern consists of alternate dark and bright fringes (or band) parallel to the slit.

The distance between consecutive bright fringes

Eqs. (7) and (11) show that the fringe width is the same for bright and dark fringes.

Concept: Interference
Is there an error in this question or solution?
Chapter 7: Wave Optics - Exercises [Page 184]
Q 6 Q 5Q 7
Advertisement Remove all ads