Describe the Various Steps of Griffith’S Experiment that Led to the Conclusion of the 'Transforming Principle'. - Biology

Describe the various steps of Griffith’s experiment that led to the conclusion of the 'Transforming Principle'.

S. F. Griffith demonstrated bacterial transformation experimentally by performing experiments on Diplococcus pneumonia. It has two distinct forms—one form secretes a polysaccharide capsule which gives the colonies a smooth appearance and another form is non-capsulated which gives the colonies a rough appearance. The capsule of the smooth form (S) is virulent
and gives an infected animal the disease pneumonia, while the rough form (R) is not virulent.

The main steps are as follows:

(i) Griffith conducted his experiments on Diplococcus pneumonia which causes pneumonia in mice. He injected the ‘S’ type living bacteria into mice and they died because of pneumonia.

(ii) He then injected live non-virulent bacteria (R) into mice and they did not suffer from pneumonia.

(iii) He then injected heat-killed virulent ‘S’ type bacteria into mice and they survived equally well.

(iv) Finally, he injected a mixture of heat-killed ‘S’ and live ‘R’ simultaneously. The mice died with the symptoms of pneumonia. Living S-type bacteria were recovered from their bodies

The occurrence of the living S-type virulent bacteria is possible only by their formation from R-type non-virulent bacteria which pick up the trait of virulence from dead bacteria. This phenomenon is called Griffith effect or transformation. Thus, transformation is the transferring of characters from one strain to another using the DNA extract of the former. 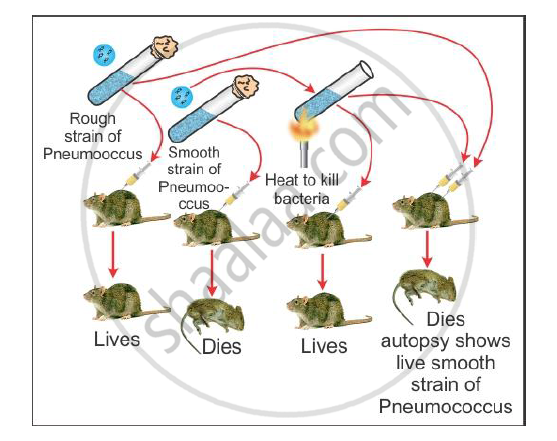