Describe the Process of Digestion of Protein in Stomach. - Biology

Describe the process of digestion of protein in stomach.

The gastric glands of the stomach secrete gastric juice that contains HCl and proenzymes – pepsinogen and prorennin. The proenzyme pepsinogen, on exposure to HCl gets converted into the active enzyme pepsin, the proteolytic enzyme of stomach. The pepsin converts proteins into proteoses and peptones (peptides). Prorennin is found in gastric juice of infants and is activated by pepsin into active rennin. It helps in digestion of milk protein casein. 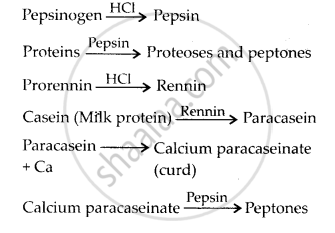 The main components of gastric juice are hydrochloric acid, pepsinogen, mucus, and rennin. Hydrochloric acid dissolves the bits of food and creates an acidic medium so that pepsinogen is converted into pepsin. Pepsin is a protein- digesting enzyme. It is secreted in its inactive form called pepsinogen, which then gets activated by hydrochloric acid. The activated pepsin then converts proteins into proteases and peptides

Rennin is a proteolytic enzyme, released in an inactive form called prorennin. Rennin plays an important role in the coagulation of milk.

Concept: Digestion of Food
Is there an error in this question or solution?
Chapter 16: Digestion and Absorption [Page 267]
Q 5 Q 3.4Q 6
Advertisement Remove all ads