Describe How the Lac Operon Operates, Both in the Presence and Absence of an Inducer in E.Coli. - Biology

Describe how the lac operon operates, both in the presence and absence of an inducer in E.coli.

In the medium where E. coli was growing, lactose was added, which induced the lac operon. Then, why does lac operon shut down some time after addition of lactose in the medium?

The E. coli bacterium carries numerous genes and these genes turn on and off according to requirement. When these genes are turned on, they undergo enzymes which metabolise the new substrate. This phenomenon is known as induction and small molecules eliciting this induction are called inducers. In the lac operon, the presence of lactose acts as an inducer.

The lac operon contains a promoter, an operator and three closely related structural genes—z, y, a—coding for enzymes β-galactosidase, β-galactoside permease and β-galactoside transacetylase, respectively. β-galactoside permease pumps lactose into the cells, whereas β-galactosidase catalyses the conversion of lactose into glucose and galactose. These genes are not expressed in the absence of lactose. The promoter (P) for the operon is the site at which RNA polymerase binds to initiate transcription of the structural genes. The operator (O) is the site at which the protein repressor–the product of regulator gene binds. In the presence of a regulator protein, the RNA-polymerase is prevented from attaching to the promoter.

A regulator gene is a DNA segment independent of an operon and it synthesises a repressor protein. This protein combines with operator and makes it inactive. This prevents RNA polymerase from binding to the adjoining promoter (P) and from initiating transcription of the structural gene. Therefore, RNA polymerase is required to negotiate the operator before transcription can occur. The repressor binds to the operator in the absence of a metabolite (effector molecule–lactose).

When an inducer or effector molecule-lactose is added to the system, it binds to the repressor to form a complex which is unable to bind the operator. The RNA polymerase enzyme now becomes free to bind to the promoter (P), and so the operator is switched on. This initiates the transcription of structural genes, producing the three polypeptides. These enzymes bring about the metabolism of lactose into glucose and galactose. 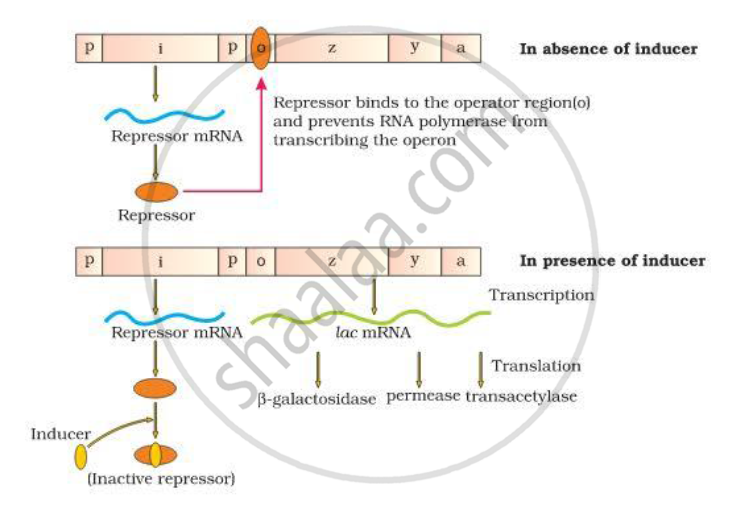 Lac operon is a segment of DNA that is made up of three adjacent structural genes, namely, an operator gene, a promoter gene, and a regulator gene. It works in a coordinated manner to metabolize lactose into glucose and galactose.

After sometime, when the level of inducer decreases as it is completely metabolized by enzymes, it causes synthesis of the repressor from regulator gene. The repressor binds to the operator gene and prevents RNA polymerase from transcribing the operon. Hence, the transcription is stopped. This type of regulation is known as negative regulation.