Derive the conditions for bright and dark fringes produced due to diffraction by a single slit. - Physics

Derive the conditions for bright and dark fringes produced due to diffraction by a single slit.

When a parallel beam of monochromatic light of wavelength λ. illuminates a single slit of finite width a, we observe on a screen some distance from the slit, a broad pattern of alternate dark and bright fringes. The pattern consists of a central bright fringe, with successive dark and bright fringes of diminishing intensity on both sides. This is called the diffraction pattern of a single slit.
Consider a single slit illuminated with a parallel beam of monochromatic light perpendicular to the plane of the slit. The diffraction pattern is obtained on a screen at a distance D ( » a) from the slit and at the focal plane of the convex lens, 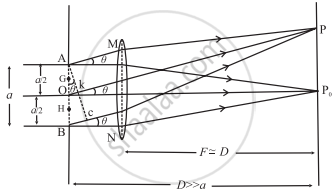 Fraunhofer diffraction due to a single slit

We can imagine the single slit as being made up of a large number of Huygens' sources evenly distributed over the width of the slit. Then the maxima and minima of the pattern arise from the interference of the various Huygens' wavelets.

Now, imagine the single slit as made up of two adjacent slits, each of width a/2. Since the incident plane wavefronts are parallel to the plane of the slit, all the Huygens sources at the slit will be in phase. They will therefore also in phase at the point P0 on the screen, where P0 is equidistant from all the Huygens sources. At P0 then, we get the central maximum.

For the first minimum of intensity on the screen, the path difference between the waves from the Huygens sources A and O (or 0 and B) is λ/2, which is the condition for destructive interference. Suppose, the nodal line OP for the first minimum subtends an angle θ at the slit; θ is very small. With P as the centre and PA as radius, strike an arc intersecting PB at C. Since, D » a, the arc AC can be considered a straight line at right angles to PB.
Then, Δ ABC is a right-angled triangle similar to Δ OP0P.

(∵ θ is very small and in radian)

as θm is very small and in radian.

Between the successive minima, the intensity rises to secondary maxima when the path difference is an odd-integral multiple of `lambda/2`:

Concept: Diffraction of Light
Is there an error in this question or solution?
Chapter 7: Wave Optics - Exercises [Page 184]
Q 10 Q 9Q 11
Advertisement Remove all ads