Derive an expression for path difference in Young’s double slit experiment and obtain the conditions for constructive and destructive interference at a point on the screen. 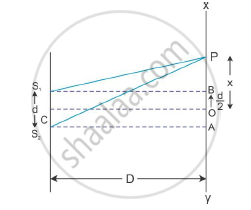 In the above figure, S1 and S2 are two narrow closely spaced slits illuminated by monochromatic light of wavelength λ. The screen on which the interference pattern is observed is represented as XY.

From the geometry of the figure, we have

Now, from the figure we can see that

This is the expression for path difference.