Two long parallel conductors a and b separated by a distance l and carrying currents Ia and Ib respectively are shown below. 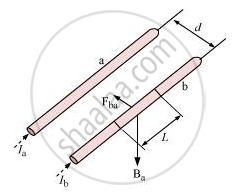 By Ampere’s circuital law, we have

Conductor b will experience a sideways force because of conductor a. Let this force be Fba.

1 ampere is the value of that steady current which when maintained in each of the two very long, straight, parallel conductors of negligible cross section and placed one metre apart in vacuum, would produce on each of these conductors a force equal to 2 × 10−7 Newton per metre of length.