During the initiation of the translation, tRNA gets charged when the amino acid binds to it using ATP. The start (initiation) codon (AUG) present on mRNA is recognized only by the charged tRNA. The ribosome acts as an actual site for the process of translation and contains two separate sites in a large subunit for the attachment of subsequent amino acids. The small subunit of ribosome binds to mRNA at the initiation codon (AUG) followed by the large subunit. Then, it initiates the process of translation. During the elongation process, the ribosome moves one codon downstream along with mRNA so as to leave the space for binding of another charged tRNA. The amino acid brought by tRNA gets linked with the previous amino acid through a peptide bond and this process continues resulting in the formation of a polypeptide chain. When the ribosome reaches one or more STOP codon (VAA, UAG, and UGA), the process of translation gets terminated. The polypeptide chain is released and the ribosomes get detached from mRNA. 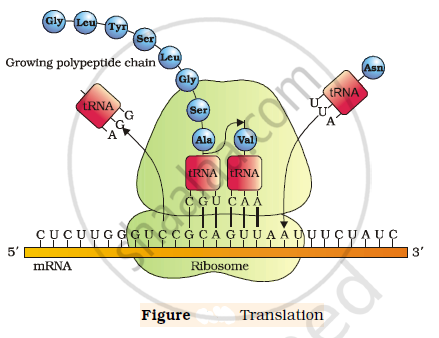