Collect the pictures of the Members of the Drafting Committee and their social background. - Social Science

Collect the pictures of the Members of the Drafting Committee and their social background.

Drafting committee is the most important body responsible for creating the constitution of India. 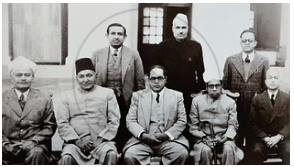 Ambedkar. An Indian Jurist, Social Reformer and Politician. Hailed as “Father of Indian Constitution’’. Campaigned against social discrimination towards the untouchables supported the Rights of women and labour.

Indian political leader. A lawyer by training. Joined the Indian National congress during the Independence movement and became a major leader from the Region of Bihar. He was the first President of India after Independence and served for full two terms from 1950 – 1962. The President who served foreth longest term.

1. Alladi Krishnaswamy Iyer. He was an Indian Lawy er. He also served as the Advocate General of Madras state from 1929 to 1944. 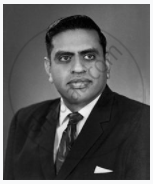 2. N. Gopalswami Iyengar: He was the Minister of Jammu and Kashmir from 1937 – 1943 and was appointed as council of state from 1943 – 1947. During that time he was the chairman of the committee for the Indianisation of Army from 1947 – 1948. He served as minister without Port folio in the 1st Cabinet under Pandit. Jawaharlal Nehru.

3. K.M. Munshi: A lawyer by profession. He was an Indian Independence movement activist, politician, writer and an educationist from Gujarat State.

4. Mohammad Saadullah B.L: A youthful Chairman of Gauhati (Guwahati) Municipality in 1919. Tali and an Athletic. M.A.BL. He served as the Minister incharge of Education and Agriculture for Assam from 1924 – 1934. He was the Prime Minister of Assam under British India.

5. B.L. Mitter: Ex-advocate General. The one and only official subreddit for India (Nehru’s cabinet) Governor of Bihar between 1962 – 1967. Resigned from the drafting committee due to ill health. N. Madhava Rao (Diwan of Mysore state) had replaced B.L. Mitter.