Collect Information About the Great Barrier Reef from Encyclopedias Or the Internet and Write a Diary Describing All You Have Learned About It in Your Scrapbook. - Geography

Collect information about the Great Barrier Reef from encyclopedias or the Internet and write a diary describing all you have learned about it in your scrapbook.

The Great Barrier Reef is one of the seven wonders of the natural world and pulling away from it, and viewing it from a greater distance, you can understand why. It is larger than the Great Wall of China and the only living thing on earth visible from space.
Where Is The Great Barrier Reef?
The marine park stretches over 3000km (1800 miles) almost parallel to the Queensland coast, from near the southern coastal town of Bundaberg, up past the northern tip of Cape York.
The reef, between 15 kilometres and 150 kilometres offshore and around 65 Km wide in some parts, is a gathering of brilliant, vivid coral providing divers with the most spectacular underwater experience imaginable.
A closer encounter with the Great Barrier Reefs impressive coral gardens reveals many astounding underwater attractions including the world’s largest collection of corals (in fact, more than 400 different kinds of coral), coral sponges, molluscs, rays, dolphins, over 1500 species of tropical fish, more than 200 types of birds, around 20 types of reptiles including sea turtles and giant clams over 120 years old. 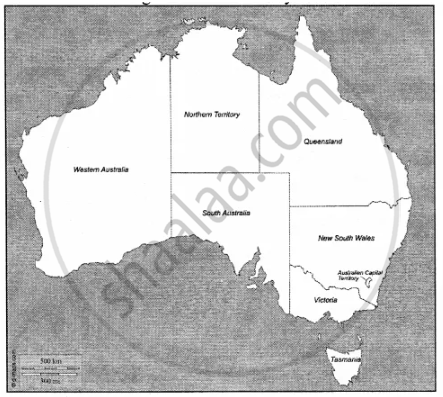 Concept: Europe, Africa, Australia
Is there an error in this question or solution?
Advertisement Remove all ads
Chapter 16: Australia:Location,Area, Political & Physical Features - Let's Do Something
Q 2Q 1Next