Arrange the following compounds in increasing order of their property as indicated:

When HCN reacts with a compound, the attacking species is a nucleophile, CN−. Therefore, as the negative charge on the compound increases, its reactivity with HCN decreases. In the given compounds, the +I effect increases as shown below. It can be observed that steric hindrance also increases in the same 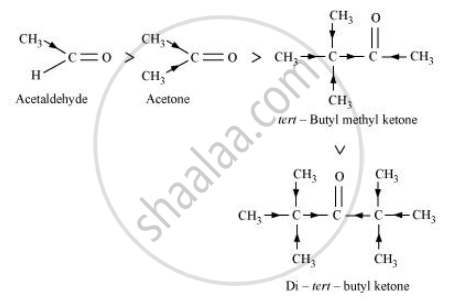 Hence, the given compounds can be arranged according to their increasing reactivities toward HCN as:

Concept: Aldehydes and Ketones - Nomenclature
Is there an error in this question or solution?
Chapter 12: Aldehydes, Ketones and Carboxylic Acids [Page 378]
Q 12.1 Q 11Q 12.2
Advertisement Remove all ads