Describe the various methods of birth control to avoid pregnancy.

Write in detail any four temporary methods of birth control.

In the natural method, the principle of avoiding chances of fertilization is used. A week before and a week after menstrual bleeding is considered a safe period for sexual intercourse.
This method is based on the fact that ovulation occurs on the 14th day of the menstrual cycle. Drawback: High rate of failure.

In this method, the male partner withdraws his penis from the vagina just before ejaculation, so as to avoid insemination.
Drawback: Pre-ejaculation fluid may contain sperms and this can cause fertilization.

This method is based on the fact that ovulation does not occur during the period of intense lactation following parturition. Therefore, as long as the mother breastfeeds the child fully, chances of conception are almost negligible.
Drawbacks: High chances of failure.

In this method, chemicals like foam, tablets, jellies, and creams are used by the female partner. Before sexual intercourse, if these chemicals are introduced into the vagina, they adhere to the mucous membrane, immobilize and kill the sperms.
Drawback: It may cause allergic reaction. This method also has chances of failure.

In this method, the ovum and sperm are prevented from physically meeting with the help of barriers.

These mechanical barriers are of three types.:

It is a thin rubber sheath that is used to cover the penis of the male during copulation. It prevents the entry of ejaculated semen into the female reproductive tract. It can thus prevent conception. It is a simple and effective method and has no side effects. Condoms should be properly discarded after every use. A condom is also a safeguard against STDs and AIDS.
e.g.“Nirodh” is the most widely used contraceptive by males. It is easily available and is given free by the government.

These devices used by the female are made up of rubber. They prevent conception by blocking the entry of sperms through the cervix. The device is inserted into the female reproductive tract to cover the cervix during copulation.

These clinical devices are plastic or metal objects. A doctor or trained nurse places the IUDs into the uterus. These devices include the Lippes loop, copper releasing IUDs (Cu-T, Cu7, multiload 375), and hormone-releasing IUDs (LNG-20, progestasert).

Physiological devices are used in the form of tablets/ pills. It is an oral contraceptive, used by the female which contains progesterone and estrogen. These hormones inhibit ovulation; hence no eggs are released from the ovary of the female using this pill and thus conception cannot occur.
They also alter the quality of cervical mucus to prevent the entry of sperms. The pill “Saheli” is an oral contraceptive for females which is non-steroidal. Saheli is to be taken once in a week. These pills are sponsored by the Government. Saheli is now a part of the National Family Programme as an oral contraceptive pill in India.
Drawback: Oral contraceptive pills have side effects such as nausea, weight gain, tenderness of breast, and slight blood loss between menstrual periods.

The birth control implant is a contraceptive used by the female. e.g. implanon, explanon, etc. It is a tiny, thin rod about the size of a matchstick. It is implanted under the skin of the upper arm and contains progesterone and estrogen. Their mode of action is similar to that of pills. They prevent pregnancy for 3-4 years. 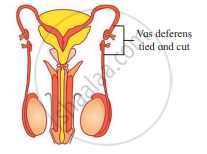 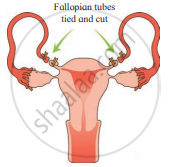 Concept: Population Stabilisation and Birth Control
Is there an error in this question or solution?
Advertisement Remove all ads
Chapter 2: Reproduction in Lower and Higher Animals - Exercises [Page 48]
Q 5.06Q 5.05Q 5.07