Answer the following in one or two sentences. What is a cell constant ? - Chemistry

What is a cell constant? What are its units? How is it determined experimentally?

For a given cell, the ratio of separation (l) between the two electrodes divided by the area of cross-section (a) of the electrode is called the cell constant. 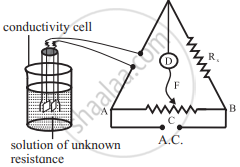 1) The cell constant is determined using the 1 M, 0.1 M or 0.01 M KCl solutions. The conductivity of KCl solution is well tabulated at various temperatures.

2) The resistance of KCl solution is measured by Wheatstone bridge as shown in the figure.

4) D is a current detector. F is the sliding contact that moves along AB. A.C. represents the source of alternating current.

5) The sliding contact is moved along AB until no current flows. The detector D shows no deflection. The null point is, thus, obtained at C.

6) According to Wheatstone bridge principle,

7) By measuring lengths AC and BC and knowing Rx , resistance of KCl solution can be calculated.

8) The cell constant is given by

The conductivity of KCl solution is known. The cell constant, thus, can be calculated.

Concept: Electrical Conductance of Solution
Is there an error in this question or solution?
Chapter 5: Electrochemistry - Exercise [Page 118]
Q 2.01 Q 1.1Q 2.02
Advertisement Remove all ads