"A Trait May Be Inherited, but May Not Be Expressed." Justify this Statement with the Help of a Suitable Example. - Science

Let us take the following example to justify the above statement. 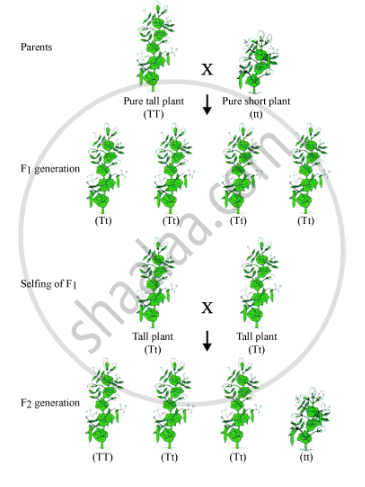 F1 generation contained all tall plants. When F1 generation underwent selfing, the trait that was unexpressed in F1(dwarf) was observed in some F2 progeny. Thus, both traits, tall and dwarf, were expressed in F2 generation in the ratio 3:1.

The above experiment indicates that although both the traits of tallness and shortness were inherited in F1 plants, only the tallness trait was expressed. This shows that traits may not show up in an individual but are passed on to the next generation.

Some traits are determined by the combined effect of more than one pair of genes. These are referred to as polygenic or continuous, traits.

An example of this is human stature. The combined size of all of the body parts from head to foot determines the height of an individual. There is an additive effect. The sizes of all of these body parts are, in turn, determined by numerous genes. Human skin, hair, and eye color are also polygenic traits because they are influenced by more than one allele at different loci. The result is the perception of continuous gradation in the expression of these traits.