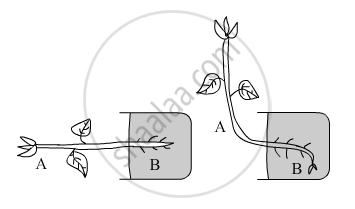 (a) The phenomenon exhibited by the positions of plant parts A and B is geotropism.
(b) The stimulus which causes plant part A to grow and bend upwards and part B to bend downwards is gravity.

Concept: Coordination in Plants - Movement Due to Growth
Is there an error in this question or solution?
Chapter 2: Control and Coordination [Page 97]
Q 76 Q 75Q 77.1
Advertisement Remove all ads