Draw the ray diagram showing the image formation and deduce the relationship between the object distance and the image distance in terms of n1, n2 and R.

When the image formed above acts as a virtual object for a concave spherical surface separatig the medium n2 from n1 (n2 > n1), draw this ray diagram and write the similar (similar to (a)) relation. Hence obtain the expression for the lens maker's formula. 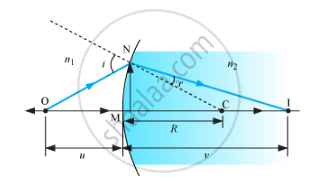 Consider a point object O lying on the principle axis of the surface. Let a ray starting from O incident normally on the surface along OM and pass straight. Let another ray of light incident on NM along ON and refract along NI.

The above figure shows the geometry of formation of image I of an object O and the principal axis of a spherical surface with centre of curvature C and radius of curvature R.

Let us make the following assumptions:

(i) The aperture of the surface is small as compared to the other distance involved.

(ii) NM will be taken as nearly equal to the length of the perpendicular from the point N on the principal axis.

For ΔNOC, i is the exterior angle

Substituting the values of i and r from (i) and (ii), we obtain

Substituting these in (iii), we obtain 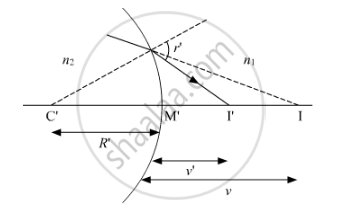 Now, the image I' acts as virtual object for the second surface that will form real image at I. As refraction takes place from denser to rarer medium