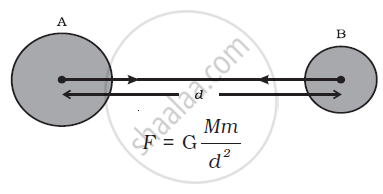 According to the universal law of gravitation, the force between two objects is directly proportional to the product of their masses. That is,

And the force between two objects is inversely proportional to the square of the distance between them, that is,

where G is the constant of proportionality and is called the universal gravitation constant. By multiplying crosswise, Eq. (3) gives